Adam and I had our 3rd welding class at Cabrillo College Thursday evening. Where last week we welded with 3/32" 6013 welding rods, this week we welded with 1/8" 7018 welding rods. The difference is that the thicker 7018 rod deposits more metal, has medium penetration vs. the 6013's low penetration and last but not least the 7018 has a tensile strength of 70K lbs/square inch vs. the 60K lbs/square inch of the 6013. 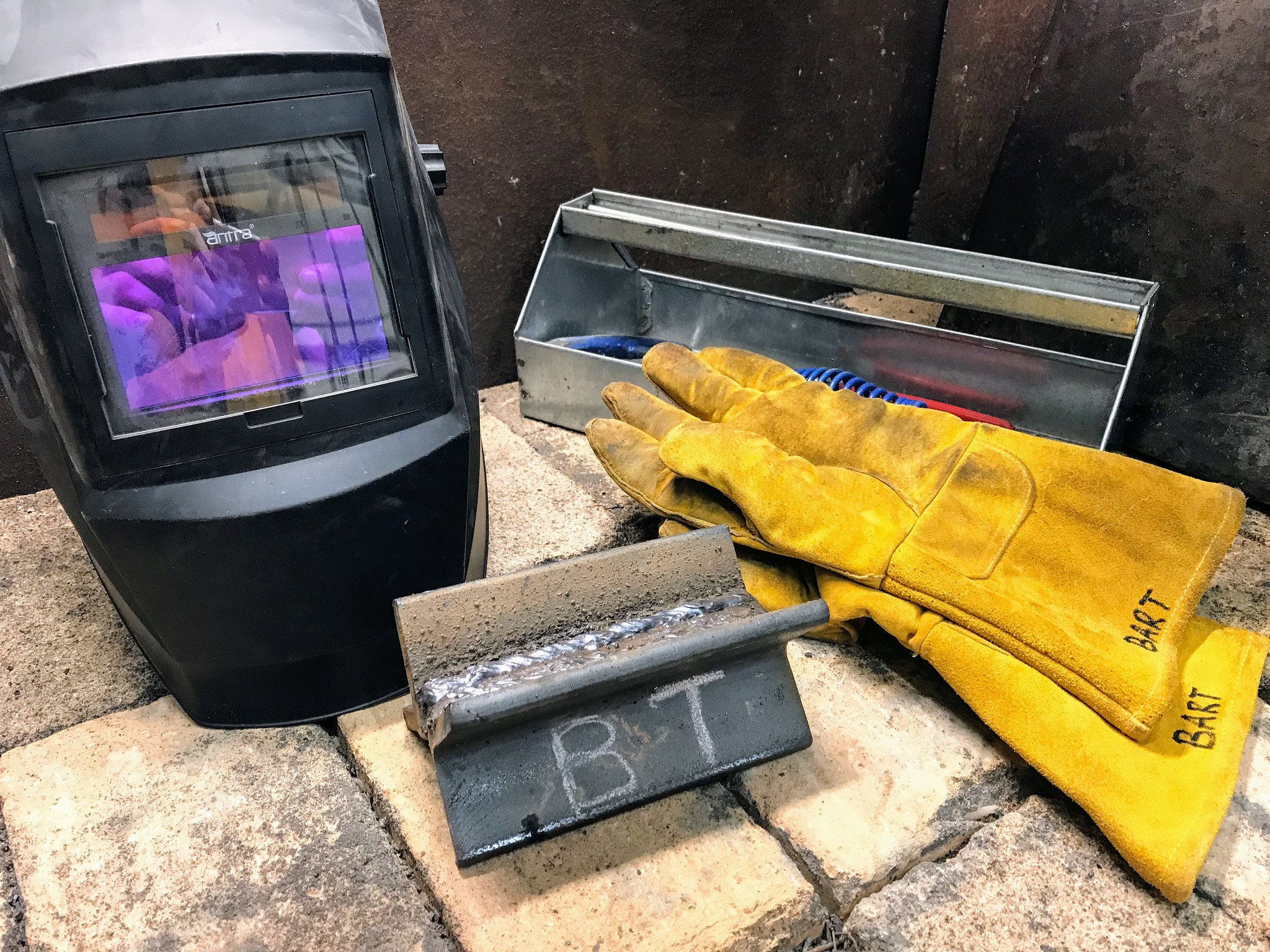 For us, it was a chance to experience how a thicker welding rod with higher penetration handles differently. Our goal was to completely fill one quadrant of the 2 welded together angle brackets. 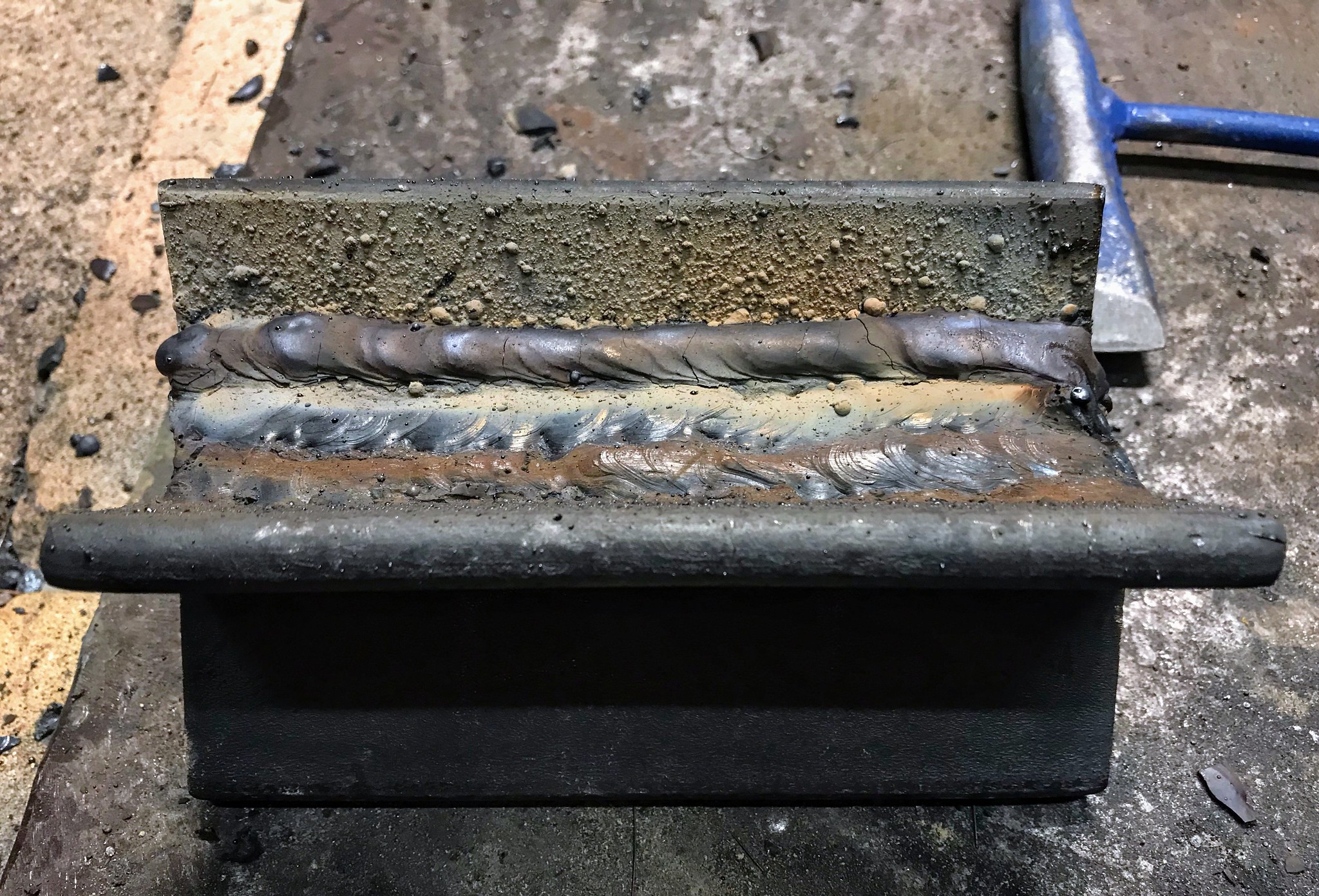 Laying down bead after bead we slowly worked our way up. Each freshly laid bead is covered in slag left behind from the coating of the welding rod. It helps shield the hot metal from the air as it cools. And it slows down the cooling, thus preventing cracking. 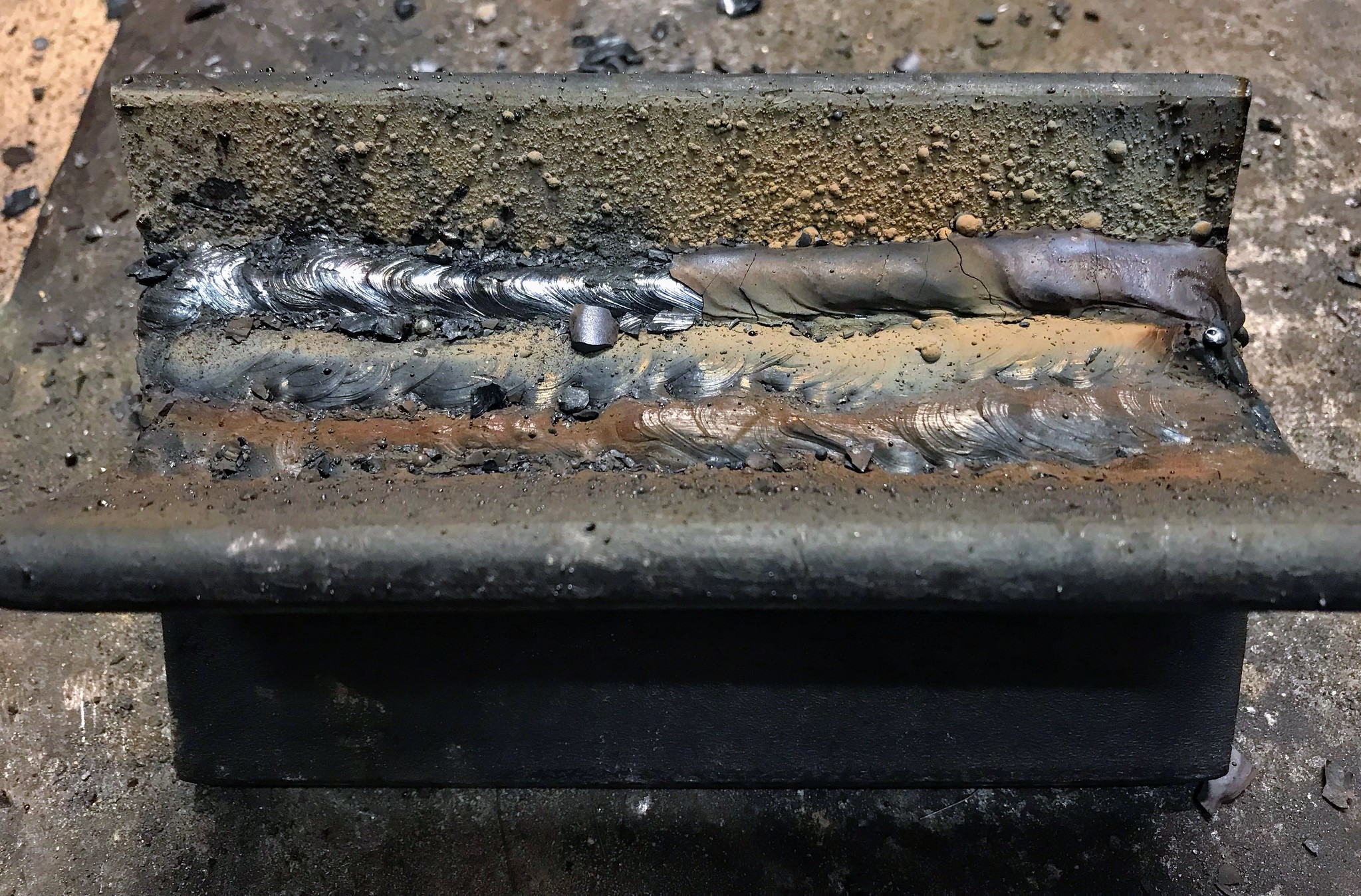 Before you can lay down the next bead you have to clear off the slag by hammering it and brushing it off. 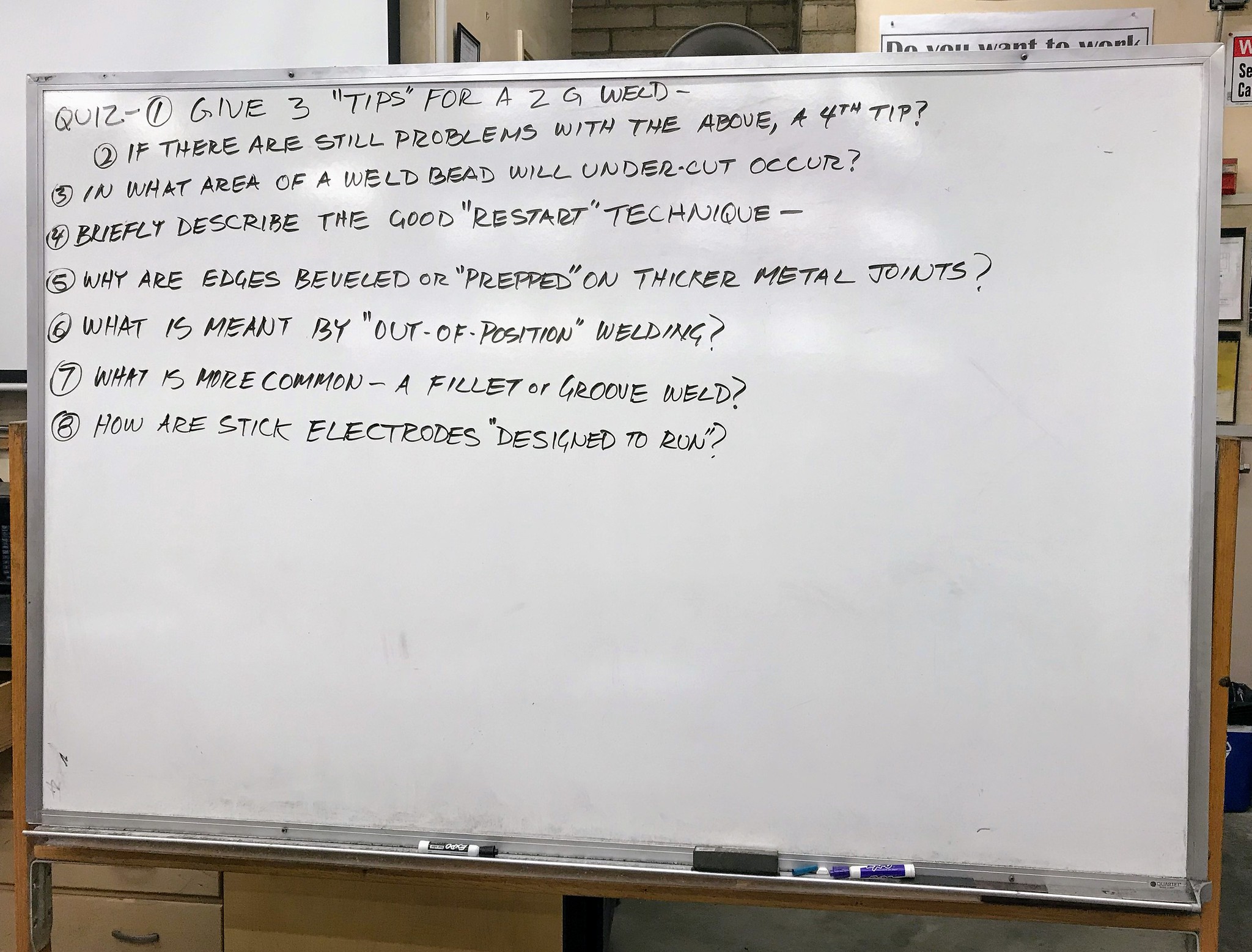 Each week ends with a quiz and this week was no different. 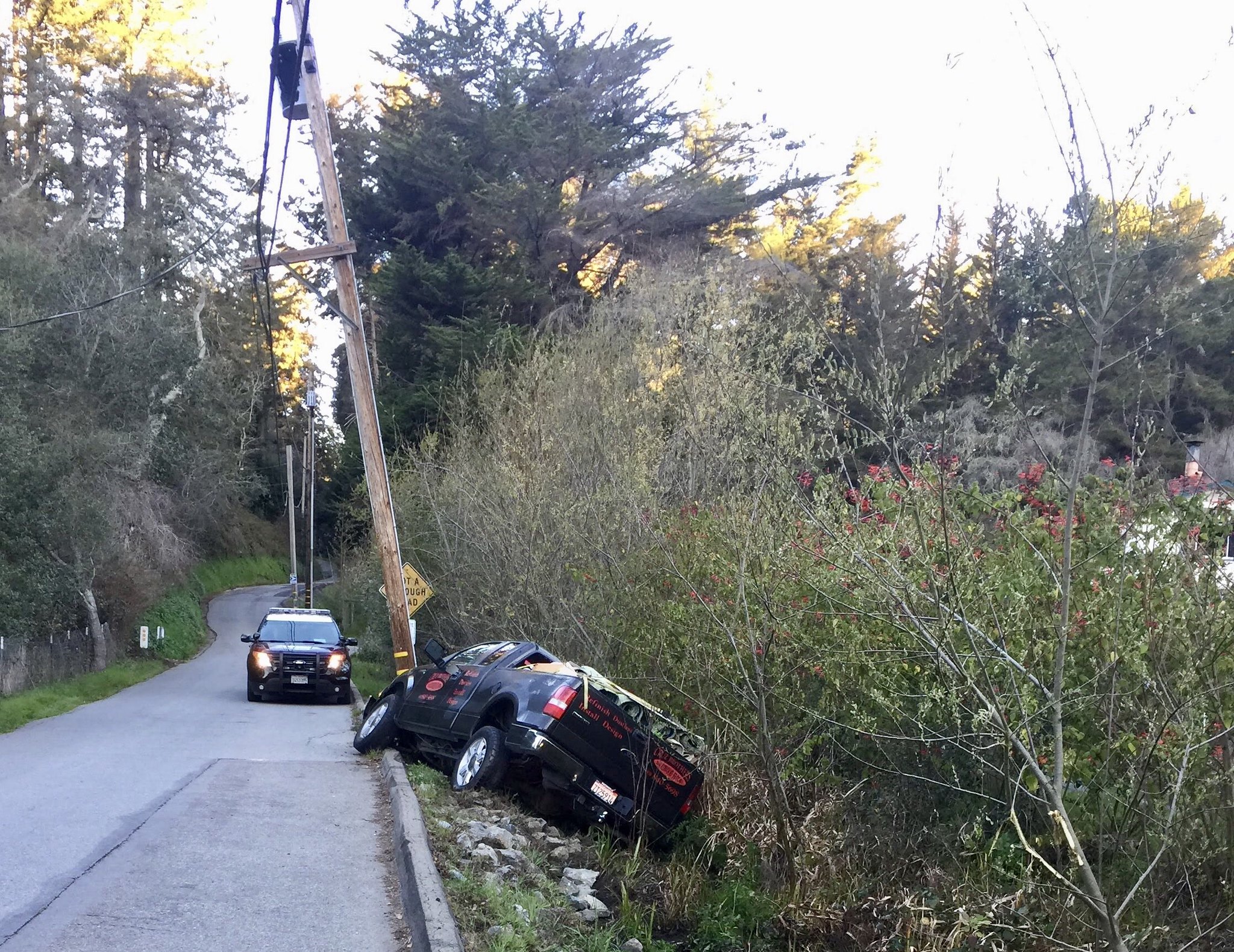 We woke up around 4 AM on Saturday morning to a commotion outside. The lights of 3 fire trucks flashed onto our house. It turned out that a pickup truck had crashed into the creek and hit a power pole. Luckily our power was still on. 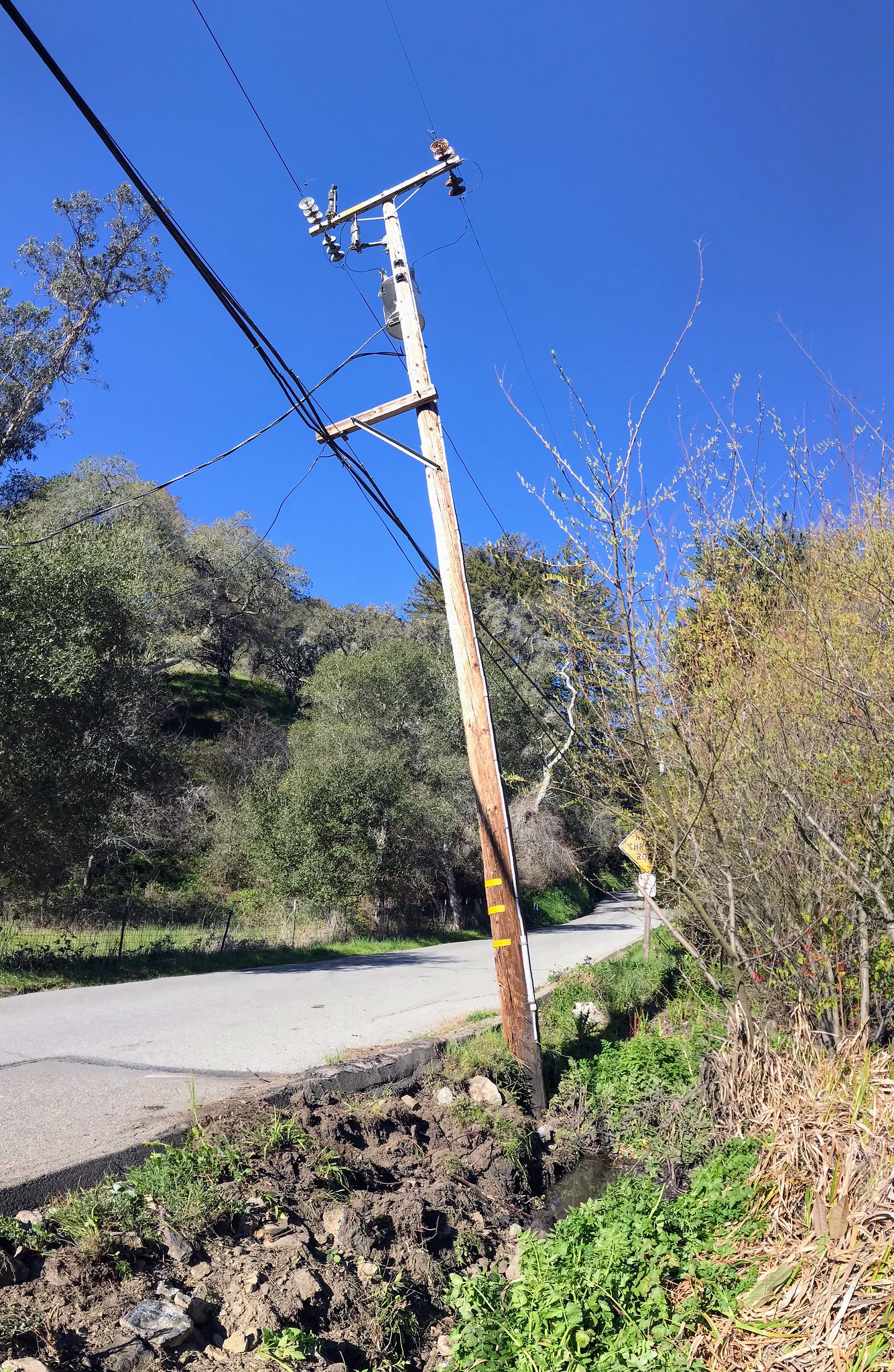 The power pole is now leaning like the tower of Pisa. If you look closely at these pictures you can see the damage was done to the road's curb and the pole's ground wire. 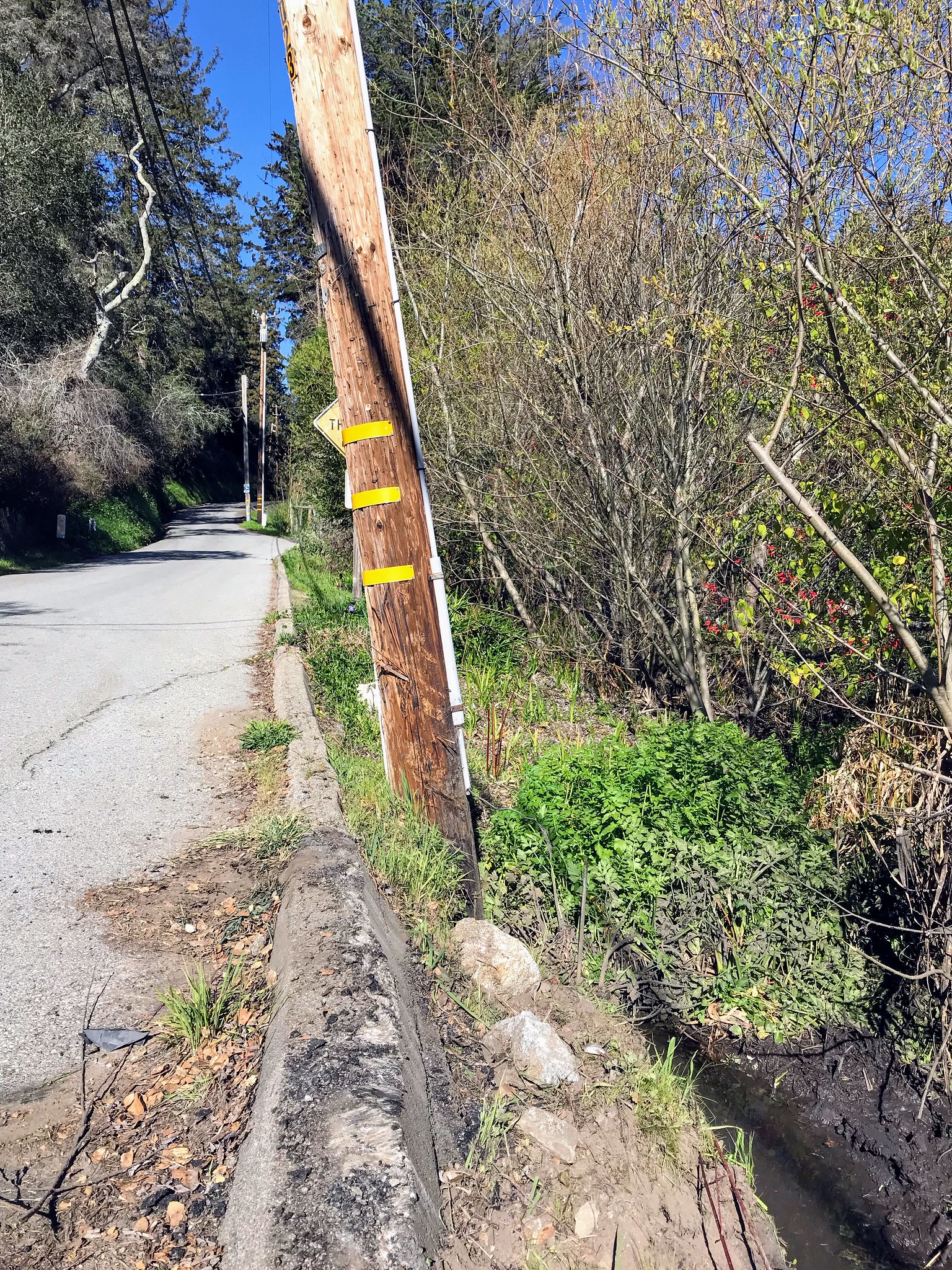 We went out for brunch to get Hoppy's Burritos at the Silver Spur and come home to a PG&E truck on our property. I walked over to a PG&E worker parked in front of our 2nd gate to find out more. He told me they just parked the truck there for a bit and would be leaving soon. Since it was water under the bridge and they would be leaving within minutes I decided not to point out that they were trespassing.

You wouldn't believe what happened next….

Not 5 minutes a later I see another PG&E worker take down our chicken fence! Now we have chickens running loose and Honey (our dog) is itching to go into the previously fenced off area where most our chickens are, including a baby chicken.

I come running out telling him to stop at once. He scoffs and only stops when another worker tells him to. These flagrant violations of our private property have us boiling. They have to take their truck off our property, right now!

As I close the gate behind the truck a foreman comes over and apologies for what happens. However, in the same breath, he tells us that the gate was open and that he would have asked permission if it weren't for Honey barking at them when they entered our property. As if that is a valid excuse. It also becomes clear that they intended to drive through our pear orchard to get to the damaged pole and repair it from inside our fence. All without asking permission, even after we came home and contacted the crew.

He doesn't say outright but I get the strong impression that he is only concerned about his reputation and/or permission to carry out their plan on our property. Sadly for them, they blew their chance and we don't allow them back in.

In the end, they left without replacing the power pole. We'll see what happens next. So far nothing. 🤷

On Monday —Presidents Day, Casper had his friend Carlos over for a playdate. Casper had a busy weekend with a Kadin playdate on Saturday and Kadin sleeping over on Sunday.

Casper's (Harry Potter) wand needed some repair and Carlos is a big Harry Potter fan himself so what better than to take the boys into the workshop to make some wands? 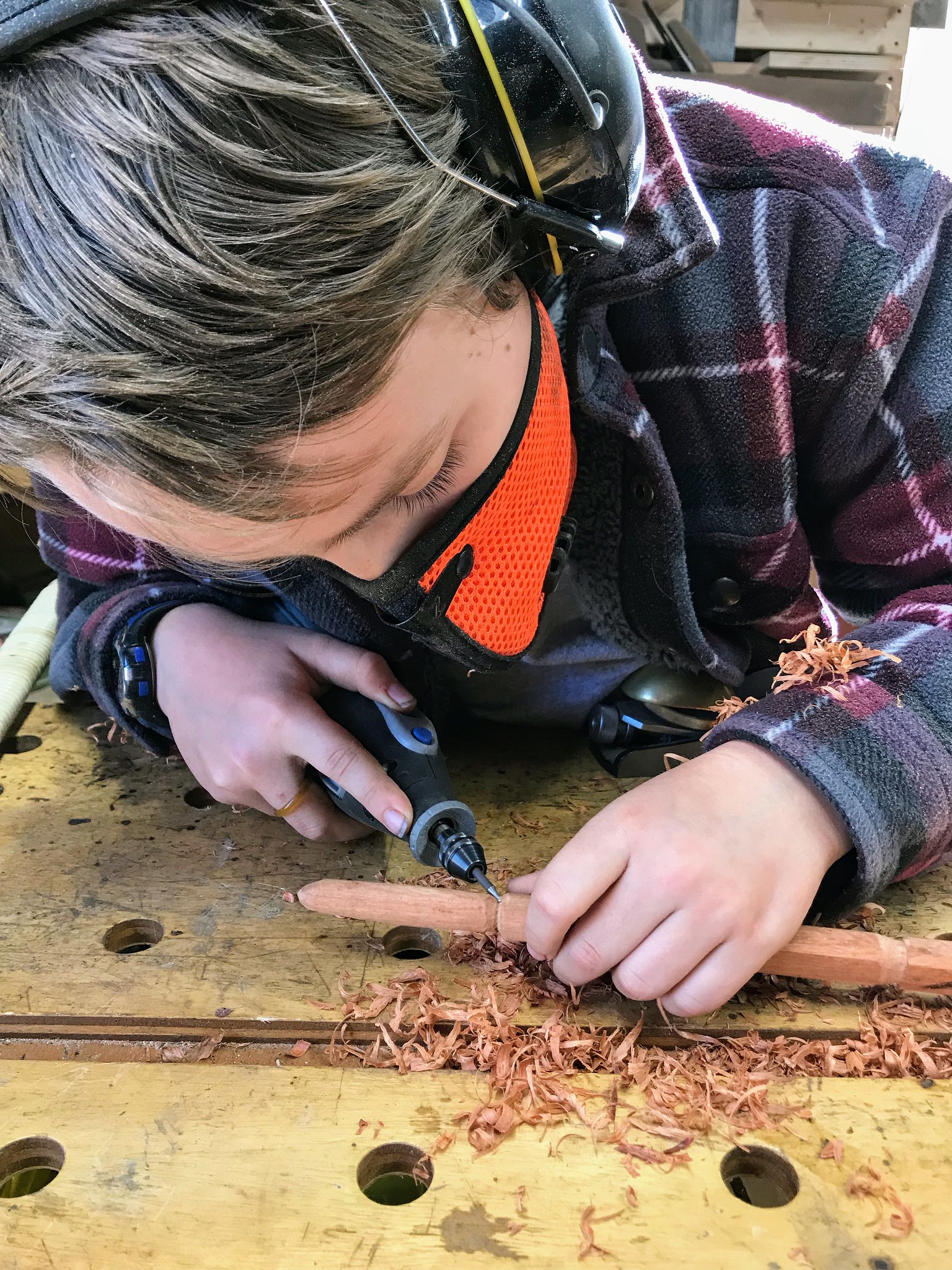 After taking off the broken tip of Casper's wand he set about improving the design of his wand. Meanwhile, Carlos was shaping the oak he picked into a wand. 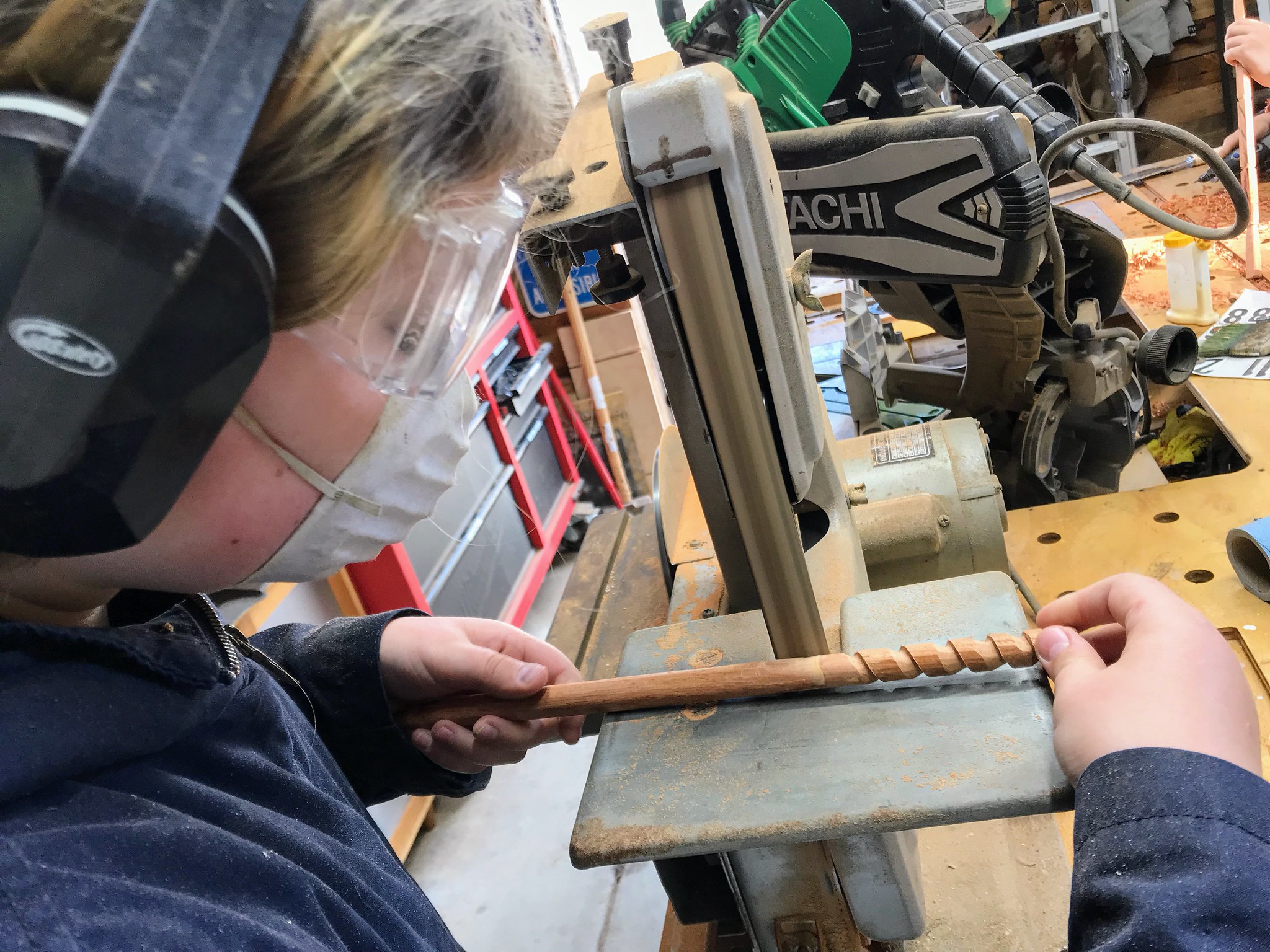 What started out as a mistake quickly became the spiral handle of his wand. 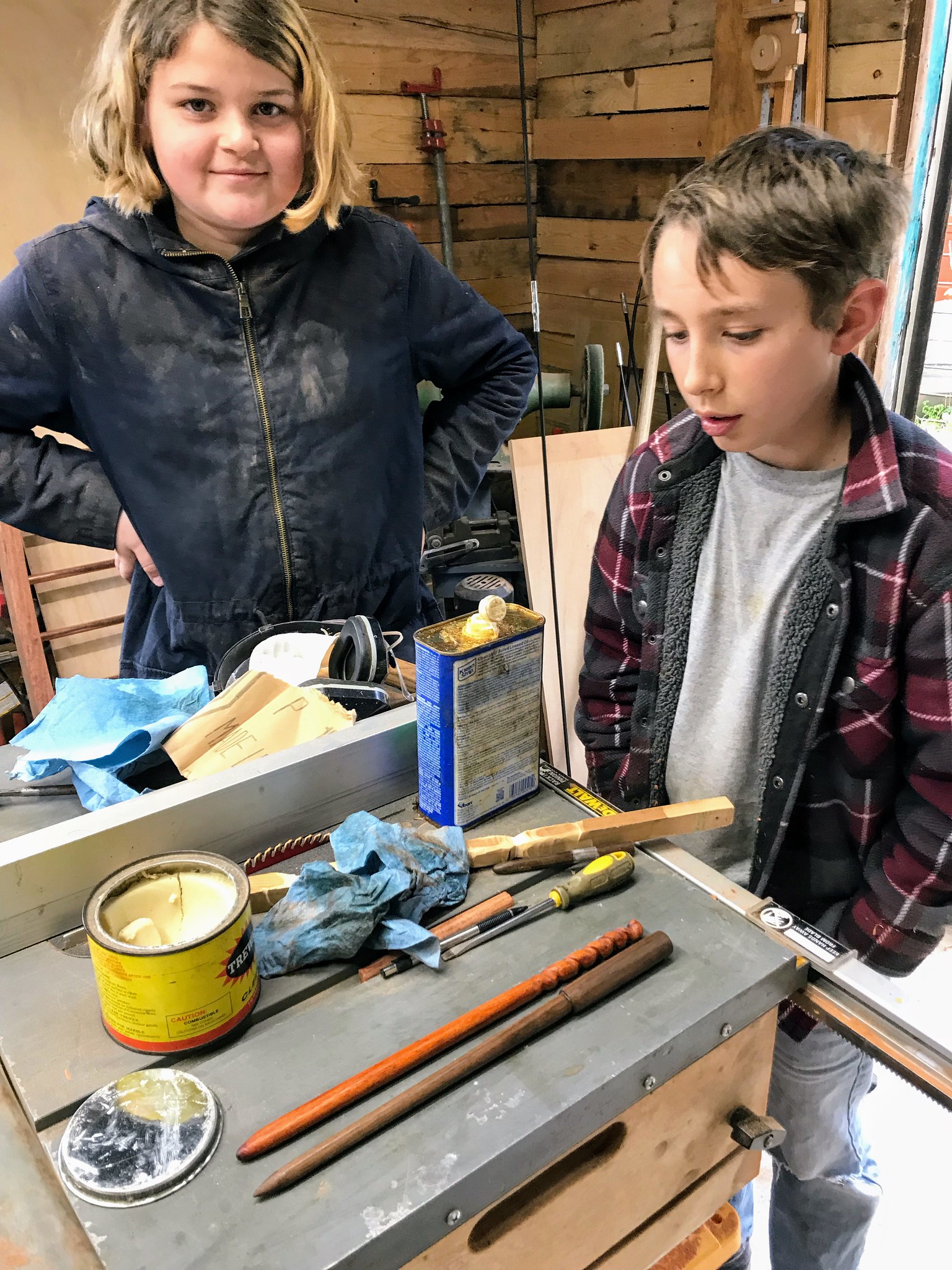 In no time, both boys became familiar with the belt sander and the Dremel. We finished the wands of with some danish oil and some wax polish for a natural finish. 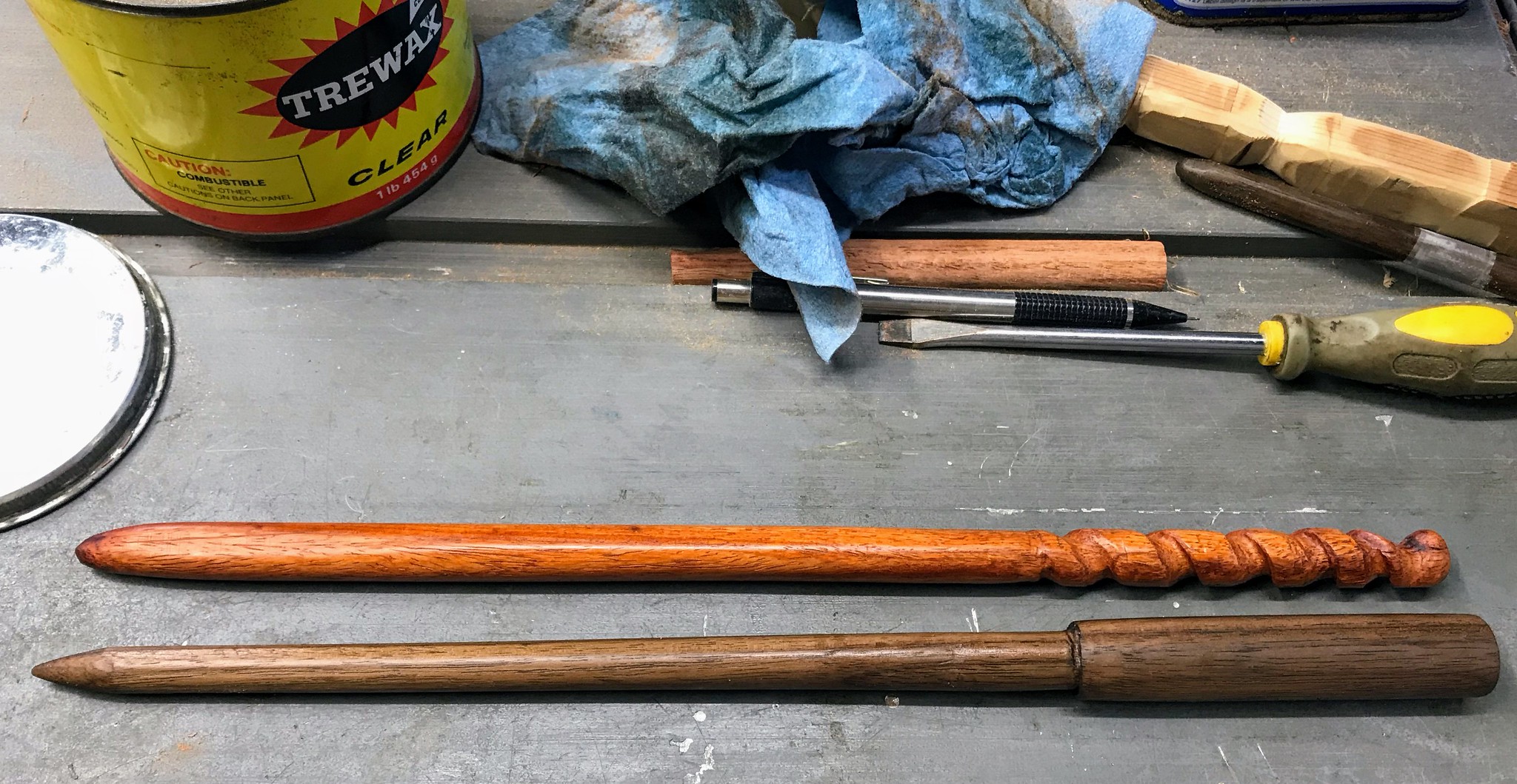