This week we added a 🔥 cutting torch to the mix. We learned how adding oxygen to fuel increases the temperature of the flame by 2,000ºF. Enough to melt and burn steel. 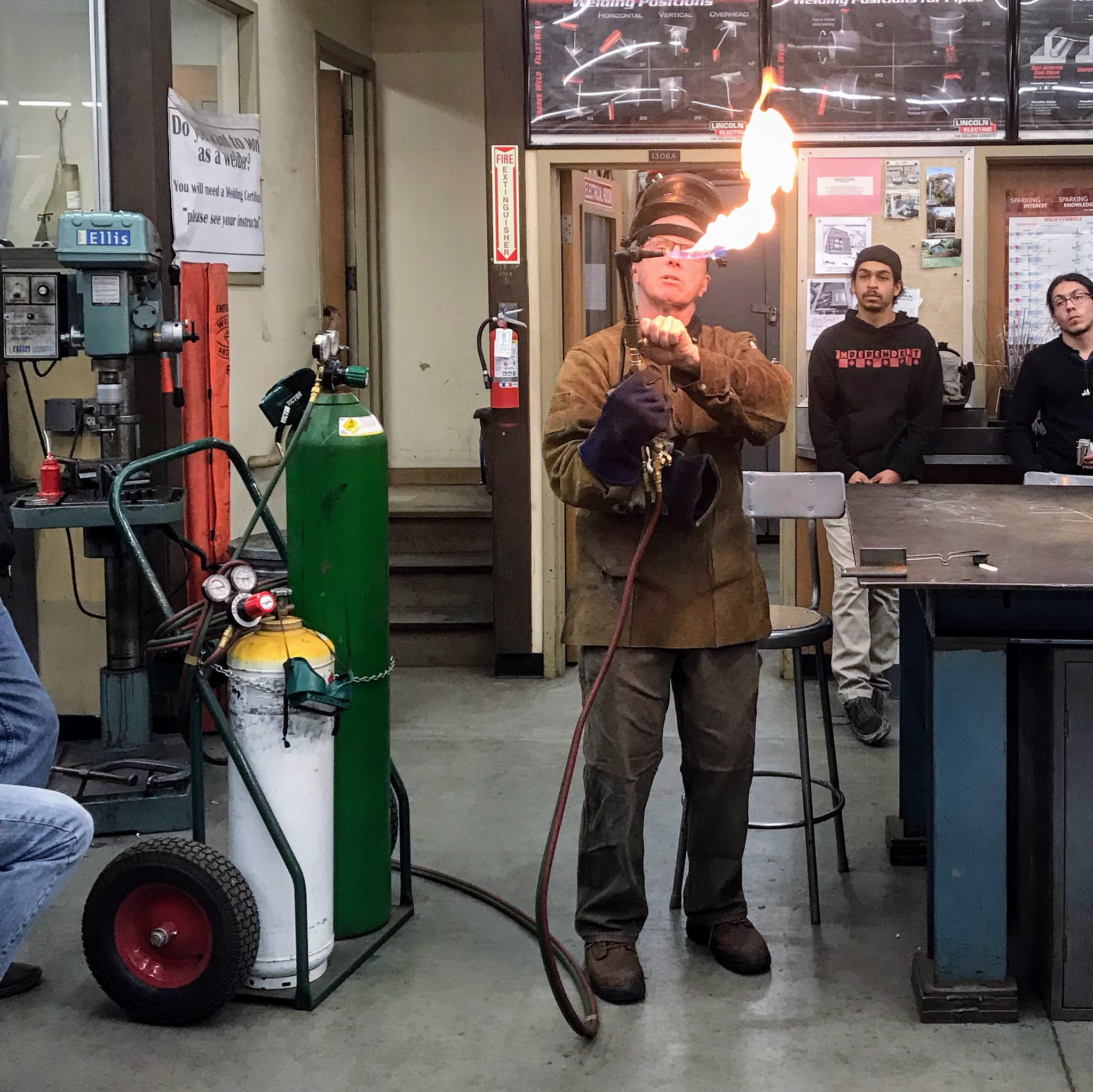 We learned how to safely light a propane cutting torch. The oxygen tank is under extremely high pressure and its valve has to be cracked slowly. Light the propane only, after adjusting the propane pressure to 10 lbs. 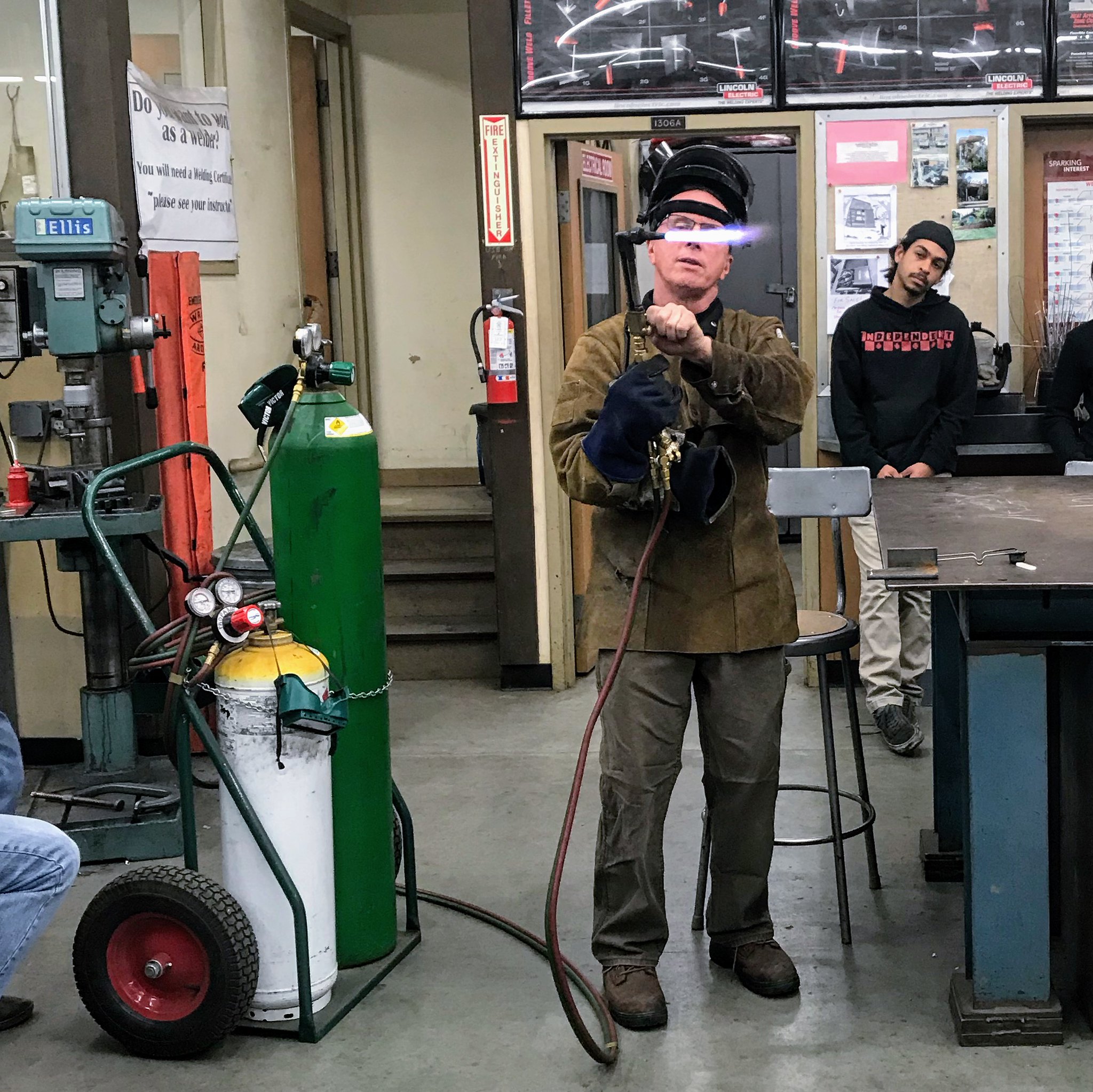 Then add some oxygen to the propane until you attain a "neutral flame".[1] Holding the flame close to a surface reveals a start pattern for a neutral flame.

Heat the starting point of the cut with the cutting torch then add additional oxygen for an even hotter flame to cut the steel.

The last load of Allan block bricks came in on Saturday. 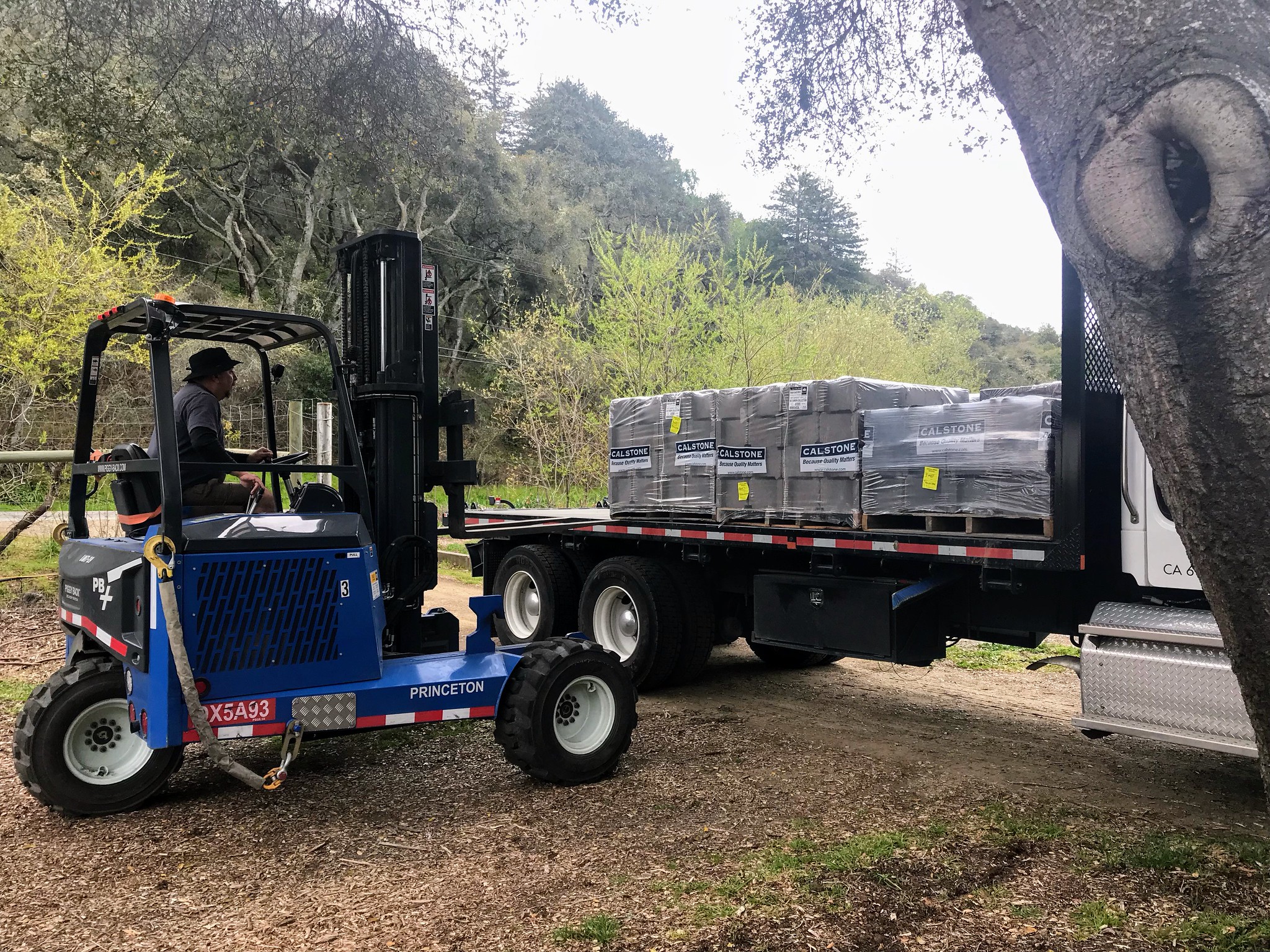 I was expecting that the bricks would have to be unloaded at the bottom of our property, thinking that the forklift would never be able to get up the hill to the retaining wall. Boy was I wrong!

The all-wheel forklift made it look easy. 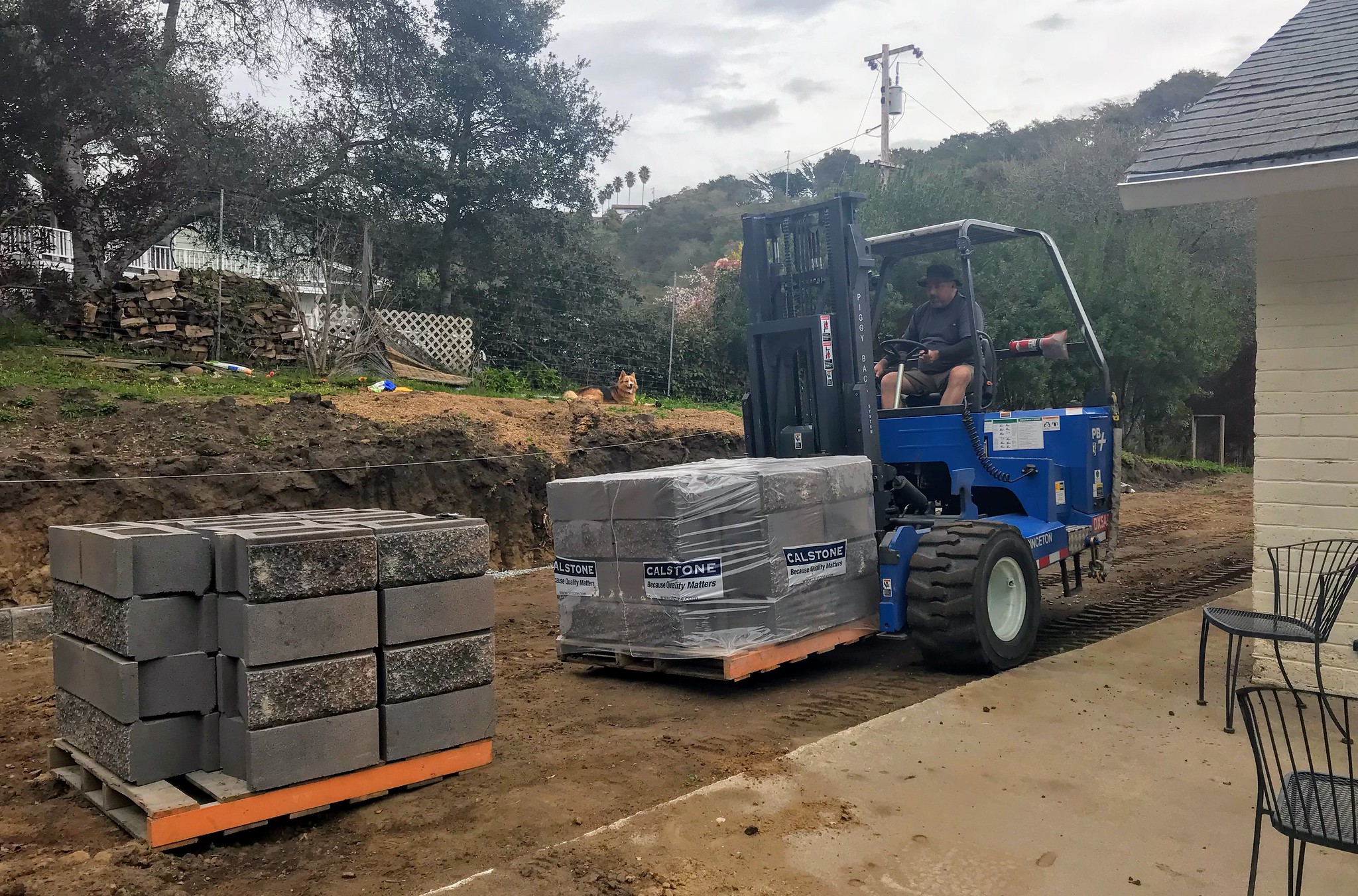 The driver stacked the pallets neatly along the wall. That is going to save me a lot of time. Time I would otherwise have to spend bringing a front loader full of bricks at a time. 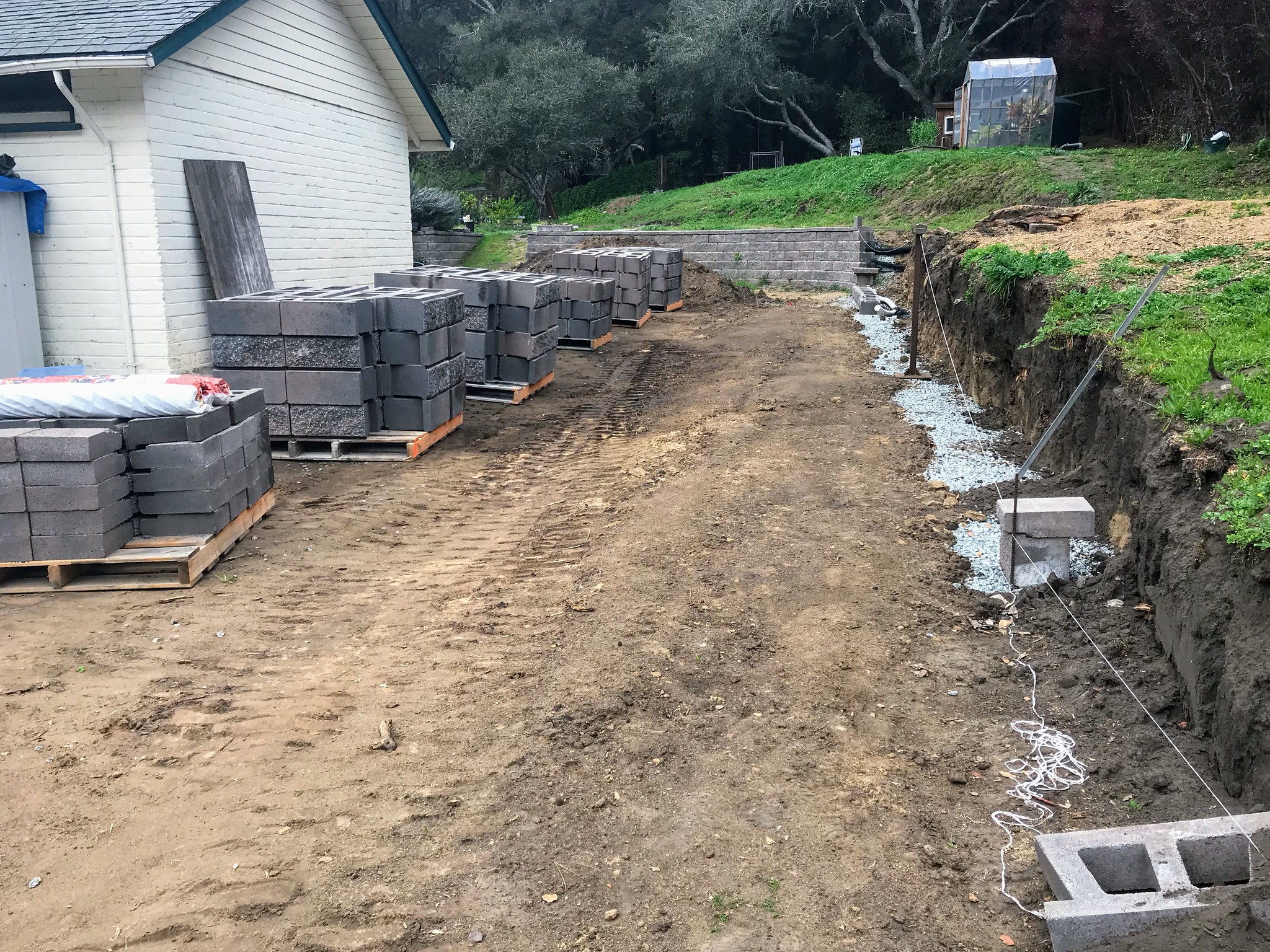 I had a little bit of 3/4" drainage rock left with which I was able to lay a few bricks. 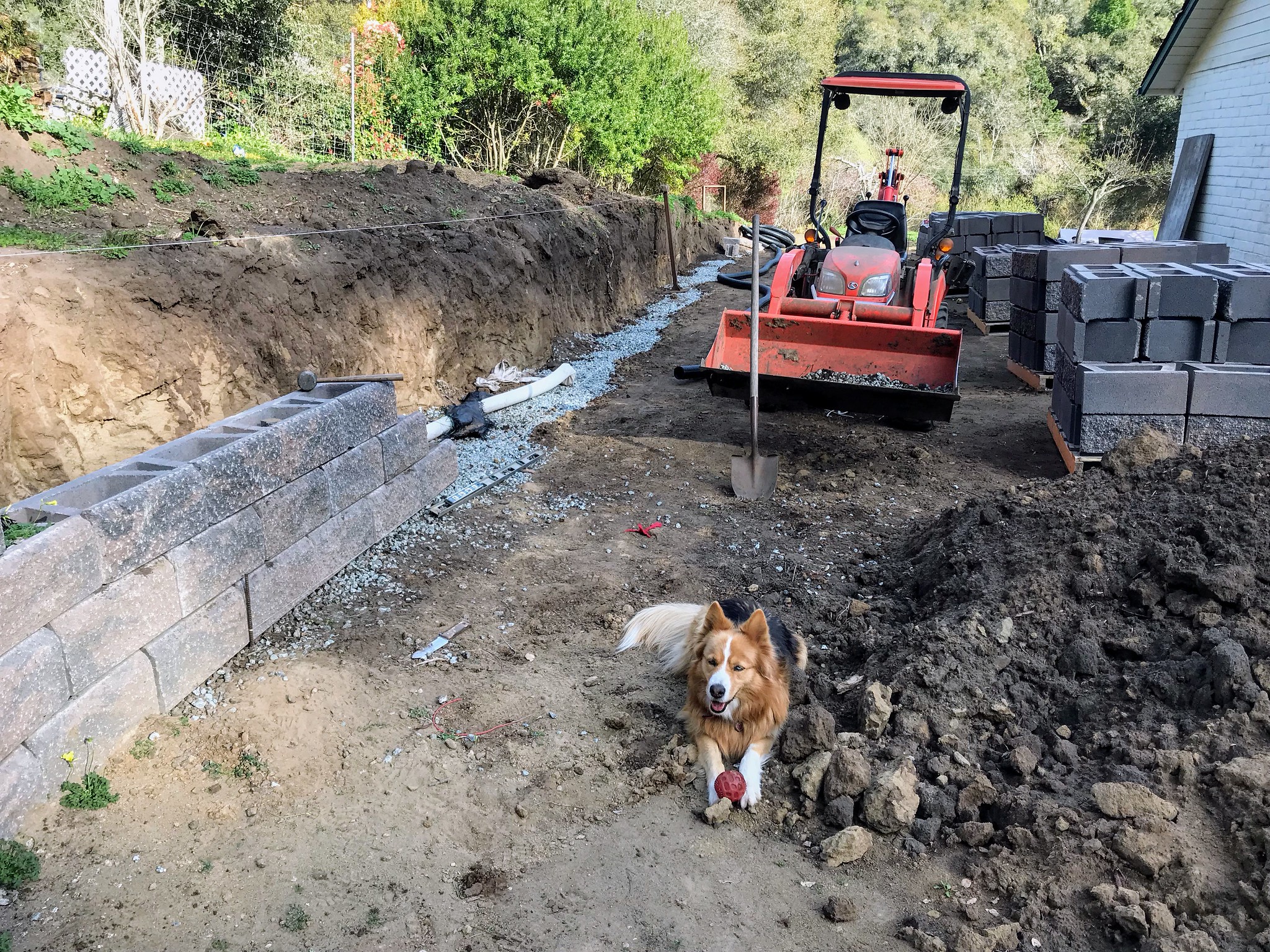 Now I'll have to wait for a new load before I can continue to the wall.

The saga of the clogged gray water drain continues. To find out what the issue was I started digging up the French drain at the end of the line. I knew that the line ran parallel to the driveway retaining wall but couldn't remember how far from the retaining wall.

So I dug a trench perpendicular to the line knowing that I would find it eventually. Before I found the gray water drain line I hit the sewage line from the rental. Because it was slow going with a shovel I thought I could switch to the backhoe. After all, I had already located the sewage line. 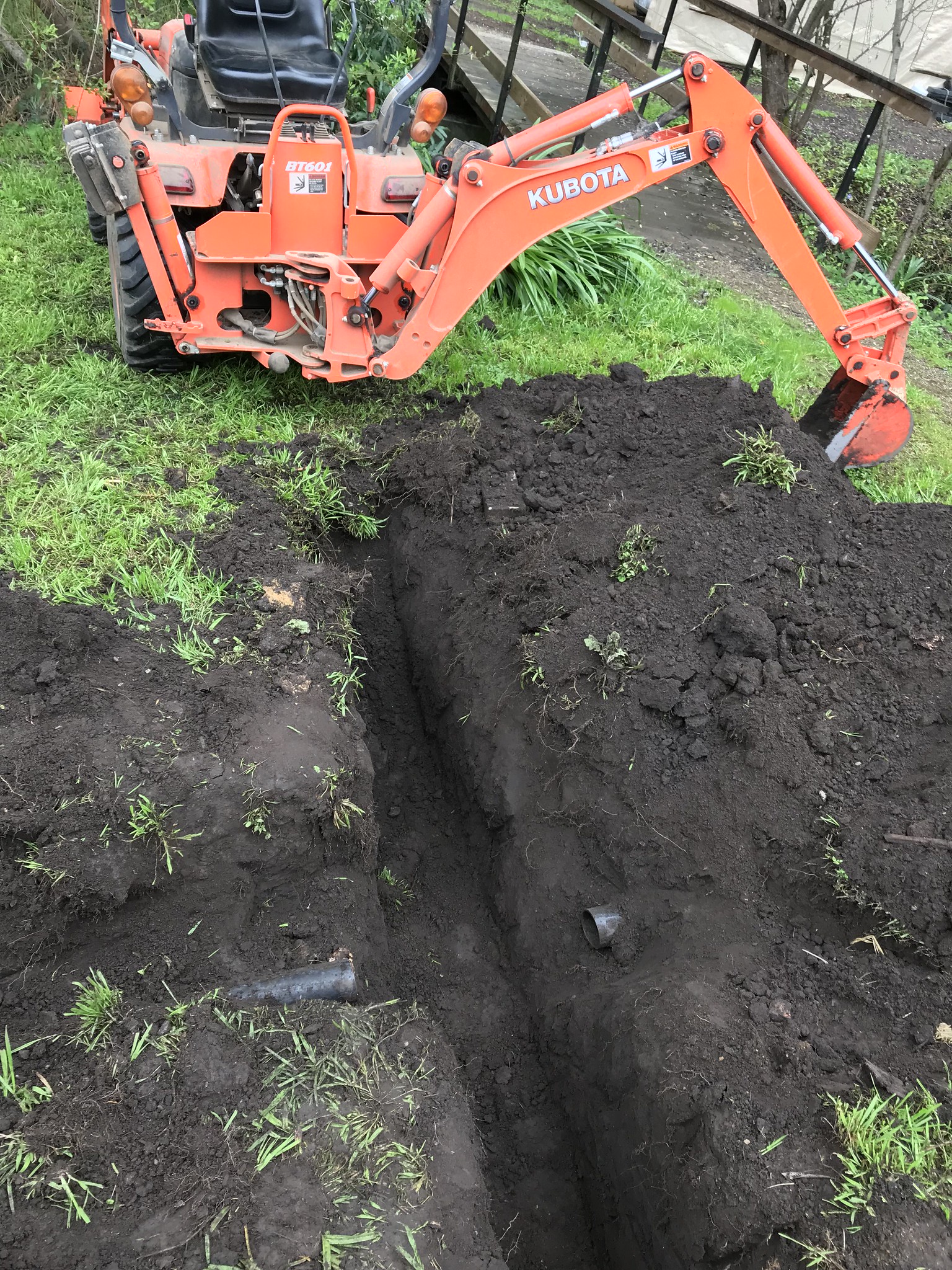 All went well until it didn't. The teeth of the bucket snagged the sewage line which instantly split apart. Ugh! Just what I needed. 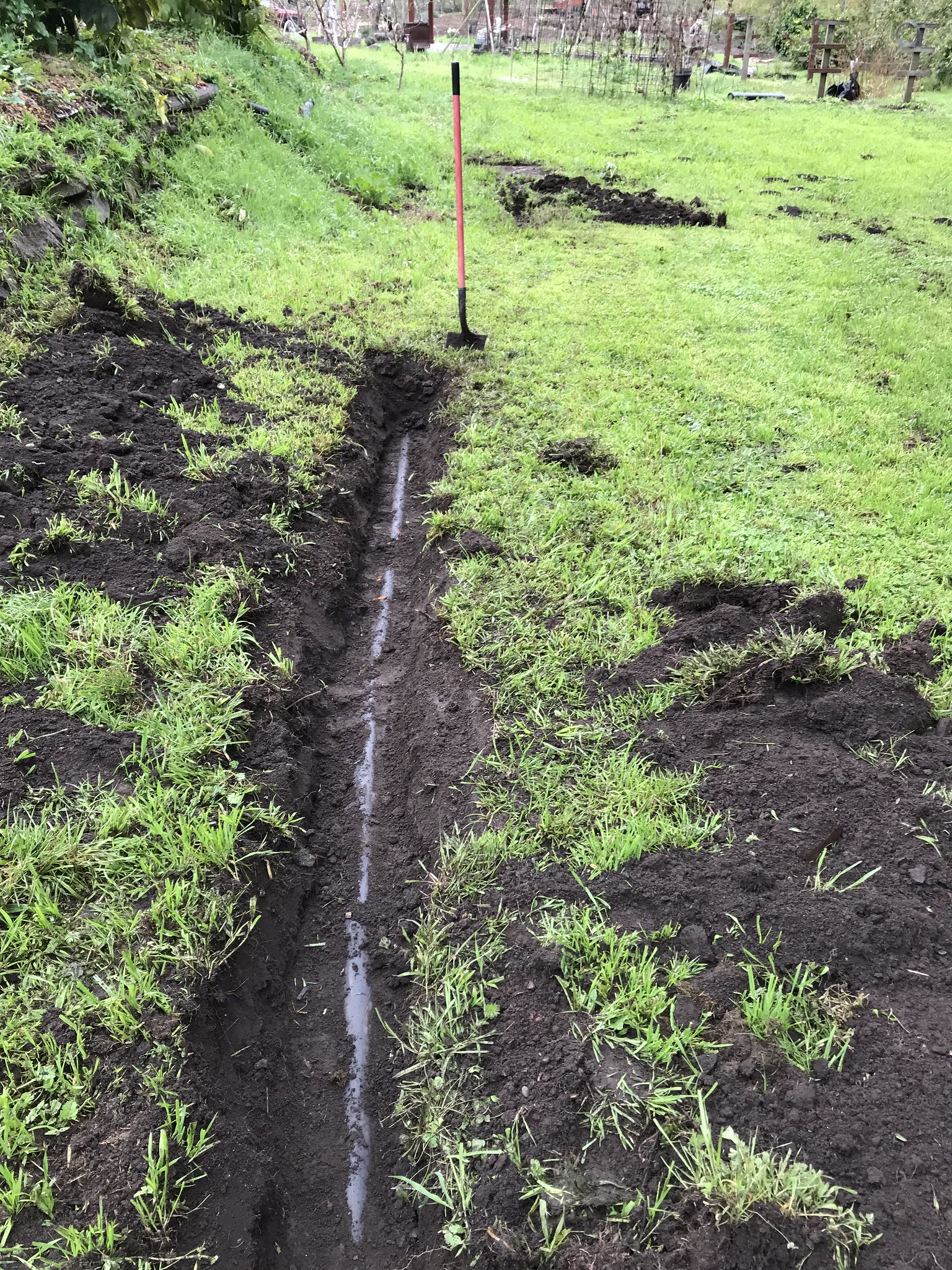 I had to go back to old photos from when I put in the gray water drain to locate it. In one photo I could see where the drain crossed the sewage line. And with that I could trace it from there to its end. 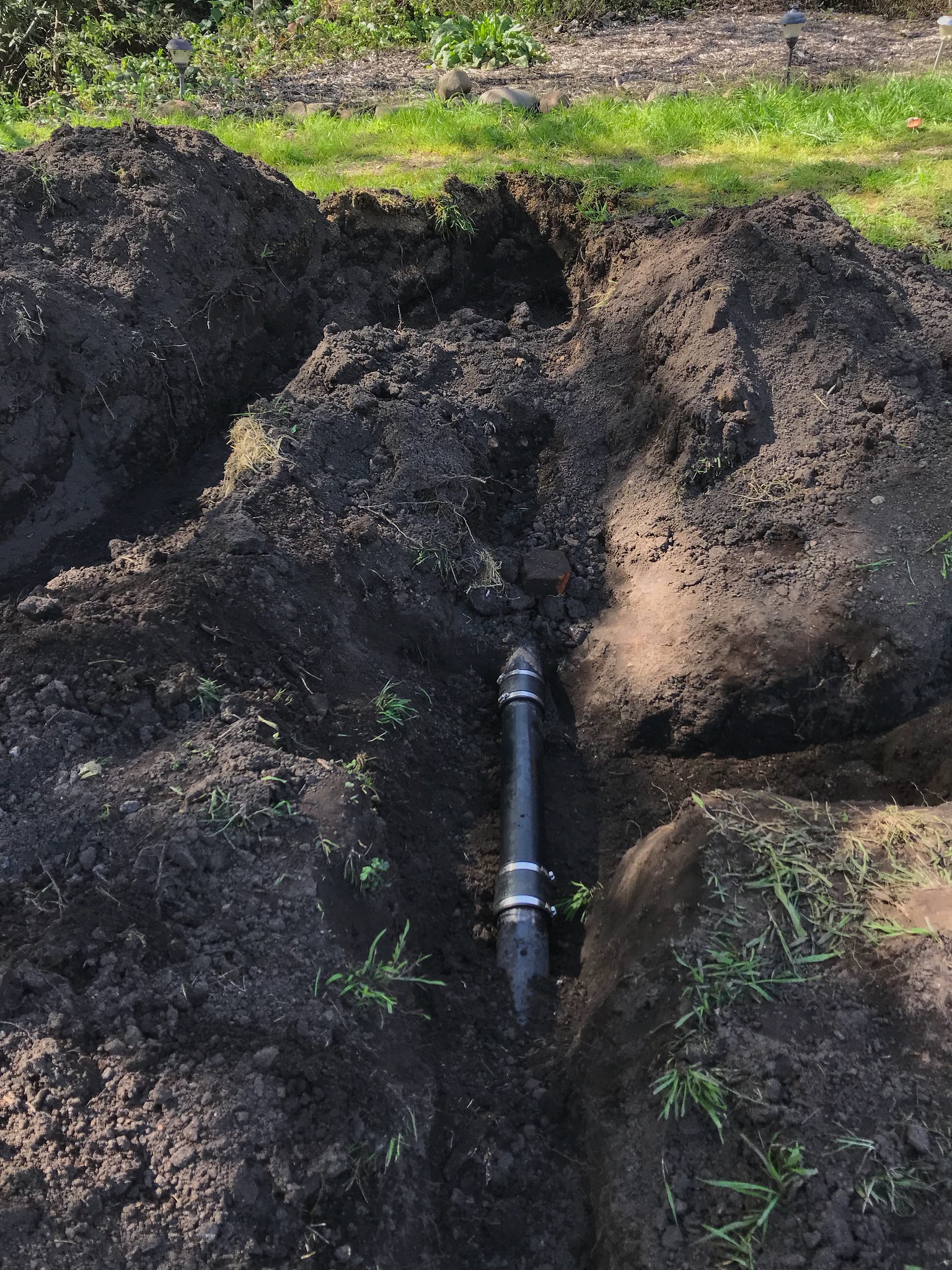 After patching the broken sewage line of course. Luckily the boys (Adam & Tony) were out on their own property for the weekend and thus wouldn't be using the sewage line. 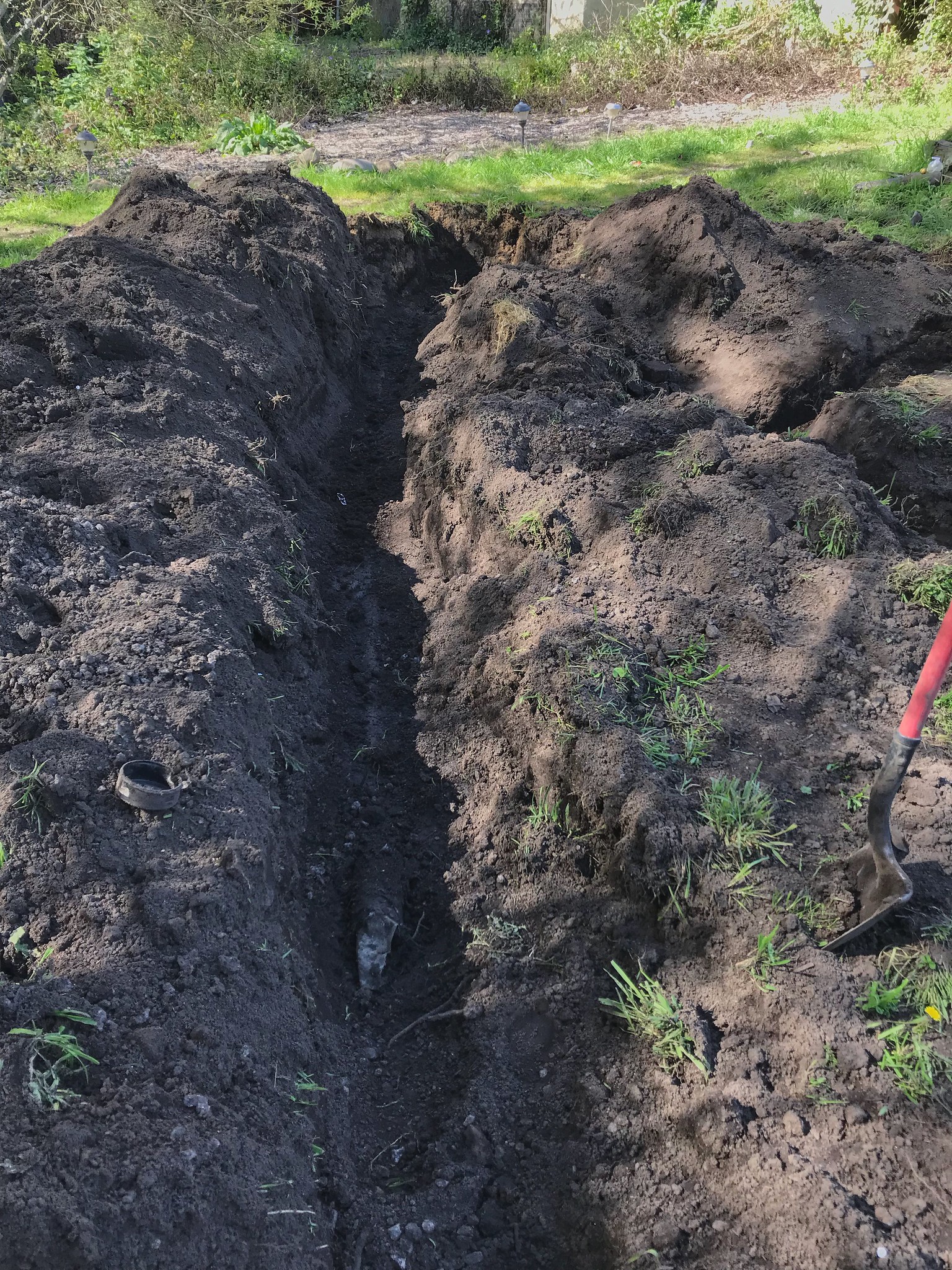 With the French drain exposed I could snake the line from the end. The pipe had a fair amount of soil in it. Despite landscape fabric wrapped around the perforated pipe. It even had fine roots in it.

While I could clear an opening large enough for water to flow through, I'm concerned that the roots won't allow water to flush out the rest of the pipe. I did run water through it but didn't see it carry out a lot of mud. 😦

I closed the trenches I dug except for a hole at the end of the French drain. Just so that I can observe how the gray water flows out next time we do laundry.

Casper had a great time this weekend. He had a sleepover with a classmate in Boulder Creek on Thu & Fri night. Unbeknownst to him, he also had a sleepover at Victor's in Carmel Sat night.

It was a surprise to him when he returned from Boulder Creek Sat afternoon that he had to clean up and pack for the next sleepover.

Tatyanna took him to Carmel while I was up to my elbows in mud dealing with the clogged drain. It was worth it though. Casper and Victor had a great time boogie boarding next morning. 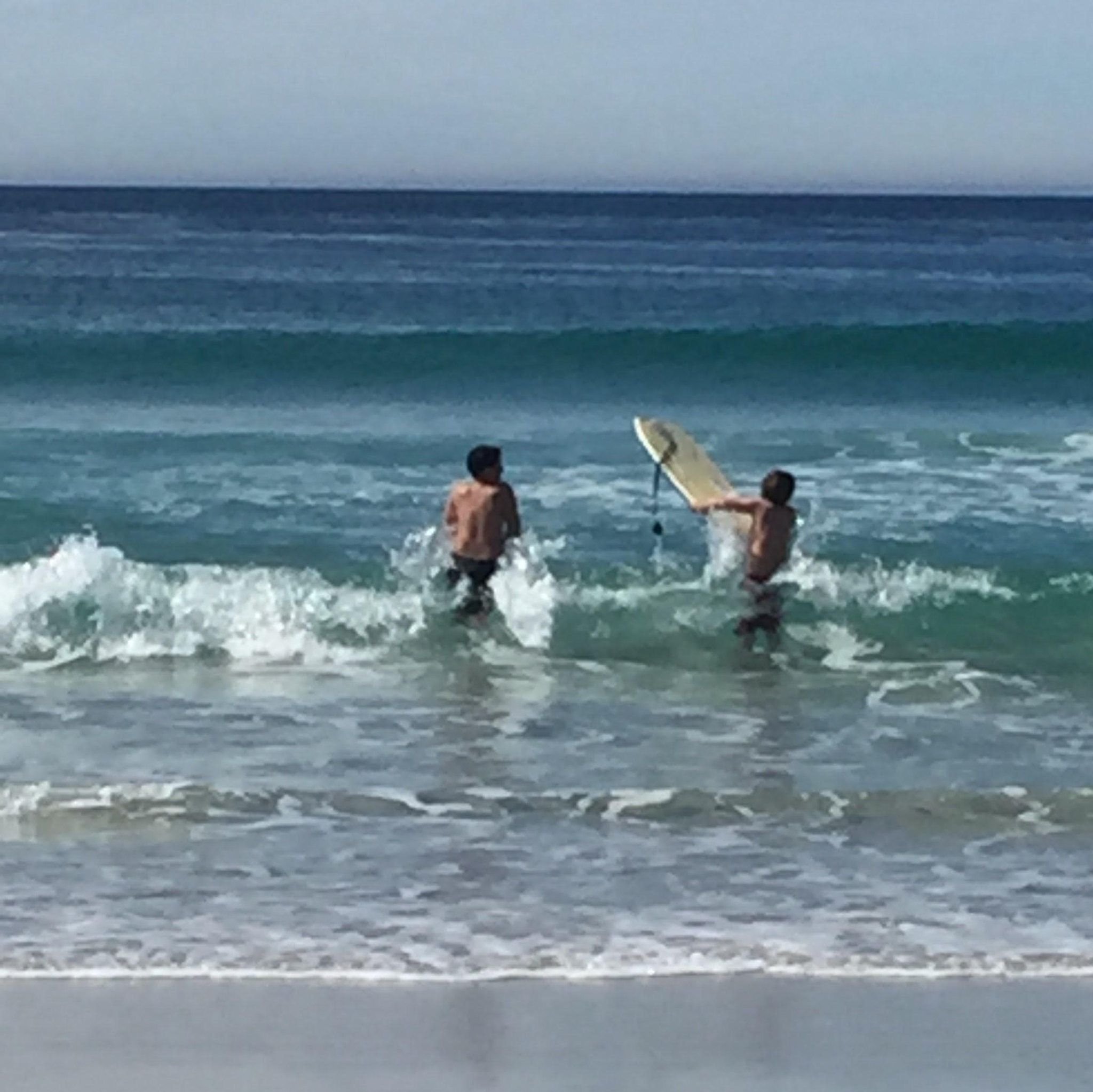